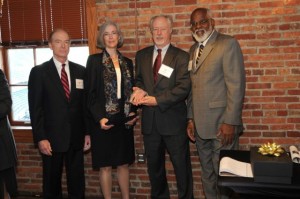 On May 20, 2010, Kathryn Goldman and Tom Minton received the Champion of Justice Award for Extraordinary Leadership from the Equal Justice Council for their work benefiting Maryland Legal Aid.

On August 12, 2009, Kathryn Goldman and Tom Minton had presented a check for over $106,000 to Wilhelm Joseph, Jr., the Executive Director of the Maryland Legal Aid Bureau.

Legal Aid will use the money to fund a number of initiatives, including implementation of its new strategic plan which focuses on the delivery of legal services to low-income Marylanders as a basic human right.

The class action which produced the $16 million settlement arose out of a national bank’s attempt to increase certain fees and interest rates on its credit card accounts without giving proper notice of the increases to its cardholders. Over 270,000 class members made claims and were paid from the settlement.

After all the individual claims were processed, there remained about $355,000 in the settlement fund.

On June 17, Judge John Glynn of the Circuit Court for Baltimore City, approved the distribution of the remaining funds to four groups: The Legal Aid Bureau of Maryland, the National Association for Consumer Advocates, Public Citizen, and Consumer Action.

The award to the Maryland Legal Aid Bureau comes at an especially good time. As with many other groups, Legal Aid has suffered some severe budget cuts over the past year. Legal Aid provides legal assistance to low-income Maryland residents in family, consumer, housing, education, and employment matters. Legal Aid attorneys also represent abused and neglected children, the elderly, nursing home residents, and migrant and seasonal farm workers.

The National Association of Consumer Advocates received over $177,000 from the settlement fund. NACA, which was founded in 1995, works to ensure justice for consumers and promote a fair and open marketplace for all Americans, particularly those of modest means.

Public Citizen, and Consumer Action, two D.C.-based non-profits which also work on behalf of consumers to prevent abusive practices by banks and credit card companies, each received over $35,000.

“All of these cy pres award recipients work diligently to protect consumers from the types of abuses we see every day, and which we challenged in this case,” said Tom Minton. “We are very pleased that the remaining settlement funds will be used to advance their work.”

G&M was co-counsel in the case with Paul Bland of Public Justice, Inc., and John T. Ward, of Ward Kershaw, P.A.