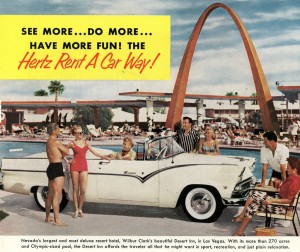 On February 20, 2013 Judge Judith Ensor of the Circuit Court for Baltimore County approved a settlement of class action filed by Goldman & Minton against Jerry’s Chevrolet. The complaint asserted that Jerry’s had sold used cars that were former daily rental cars (often acquired from a subsidiary of Enterprise Rental Car Co. called EAN Trust) without disclosing former rental status, as required by Maryland law.

Jerry’s continues to deny liability, but has agreed to a settlement which will pay $600 cash to every customer who bought a former rental car from Jerry’s between May 11, 2008 and November 2012. Notice to the class was mailed during the week of December 17.

The Maryland regulation requiring disclosure of former rental status states: “Vehicles formerly used for a purpose other than a consumer good shall be clearly and conspicuously identified as to their former use. This includes, but is not limited to, vehicles formerly used … (f) as short-term rental vehicles.” Many dealers argue that the disclosure is unnecessary as a practical matter because, they contend, rental vehicles are kept in top-notch condition and re-sold with relatively low mileage. But former rental are generally considered worth less than other comparable cars in the commercial market, according to a study commissioned by the rental car companies.

There are many reasons why these cars are worth less. For example, rental car companies usually repair accident damage on their own. Insurance companies are not involved, so the accident never gets reported in the car’s history; you won’t see the accident or repairs on Carfax reports. And, rental cars may be involved in more accidents than non-rentals, simply because their drivers are unfamiliar with the cars and the roads on which they drive them. In addition, some rental car companies buy fleets of cars from manufacturers with certain safety features deleted.

So, if you see a report on Edmunds.com that says your car has a four-star crash rating, that rating may be the result of four-wheel antilock brakes, or side curtain airbags that the standard model may have but the rental version does not. It is also worth noting that in the recent past, some rental car companies failed to perform safety recall work that manufacturers had deemed necessary. That problem appears to have been addressed by the FTC, but if you buy a former rental from 2009 or earlier, this could be a very serious problem.

One of the largest factors in making rental cars potentially worth less than other cars is the result of the way they are driven. People driving rental cars may not avoid that pothole in the middle of the road, for example. In the trade, this is known as “moral hazard,” and it is an important factor to consider when purchasing and pricing a former daily rental.

Maryland law requires that you be given the information necessary to make an informed decision when buying a former rental car. The settlement with Jerry’s vindicates that regulatory objective. It is the second such class action settlement that G&M has achieved against a Maryland used car dealer in 2012.