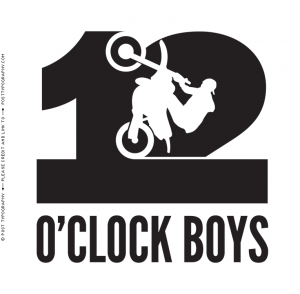 Called by some The Wire with Wheelies, this is the first film by Lotfy Nathan, 26, a filmmaker and visual artist based in New York who spent four years in Baltimore at the Maryland Institute College of Art.

Pug, a 13-year-old, is the center of a story that describes the City’s thriving subculture of off-road riders whose freewheeling style takes over the streets of the Baltimore. Pug wants to be a member of the Pack. The Pack causes harrowing, awe inspiring mischief across the City – mischief that the Baltimore City Police have limited ability to contain because they are not allowed to give chase.

12 O’Clock Boys had its world premiere at the South by Southwest film festival in March 2013. Oscilloscope Laboratories, an independent film distribution company, has purchased the North American rights.

The Maryland premiere will be May 10, 2013 at the Maryland Film Festival.

Kathryn Goldman assisted in the rights clearance for the film.

UPDATE: August 5, 2014 — The film can now be purchased on DVD and streamed from Amazon and elsewhere.