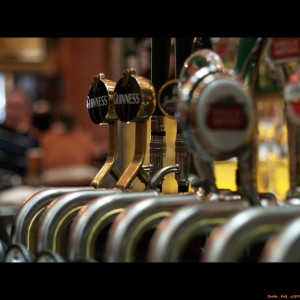 Is it the properly poured Guinness – pull, settle, pull, drink?

Is it the Golden Vale Fries with melted cheese and rasher (bacon) bits that the whole family reaches for?

Or is it the live Irish music – polished professionals like O’Malley’s March or a pick-up on Sunday nights band playing traditional Irish music for their grog (or Cokes for the younger musicians)?

Maybe it’s all these things on a Sunday evening bringing a comfortable close to a busy weekend. Or on a Thursday after work setting the pace for the upcoming days off.

Whatever it is, we at Goldman & Minton seem to be taking to the Irish style with ease. And that has moved this pub into our favorite clients column.

Named for the 1970 Academy Awarding epic film about forbidden love set during the Irish Rebellion of 1916, Ryan’s Daughter is a place for people to gather, laugh, eat, drink, hear music and relax.

In naming the pub after their favorite movie, the owners, Donal Doyle and George Georges, pay tribute to The Senator Theatre for keeping the Belvedere Square area vital over the years.

Great care was taken to create a mood and menu that the entire family would enjoy. The atmosphere speaks of an old-time Irish pub with a warm hearth, weathered antiques and all sorts of bric-a-brac in every nook and cranny.

And the food is authentic Irish fare featuring fish and chips, bangers and mash, corned beef and cabbage, and lamb stew along with a selection of tempting starters, fresh salads, savory sandwiches and rich desserts. Even with the abundance of potatoes in a variety of styles, South Beach and Atkins are also spoken here.

Ryan’s Daughter offers an exceptional, international variety of beers and ales at four different serving stations. The varieties of amber brews include Guinness, Harp, Magners Cider, Smitwicks, Boddingtons, and Carlsberg. And, the Guiness is poured the traditional way which, with a little patience, results in the thick, creamy pint regulars may refer to as “mother’s milk.” Kenwood wines and fourteen different Irish Whiskeys are also available.

Patrons can hear great music four nights a week at Ryan’s Daughter: Thursday, Friday and Saturdays at 8 pm, and on Sundays starting at 6 pm. Some of the best musicians from the Mid-Atlantic area and beyond are scheduled to perform throughout the year. These musicians play everything from traditional Irish to contemporary Celtic to folk and blues. On Sundays, you may be asked to bring your bodhran and play along.

A Bit of History on Irish Pubs

Pubs are an important part of Irish history. They date back to the Middle Ages when merchants and weary travelers would rest up and take their fill of food and drink.

The term “pub” derives from “public house” as opposed to “private house” which were member-only clubs. Anyone could enter a pub and find refreshments and convivial company. The proprietor of the pub was called a “publican.”

Irish pubs are famous for story-telling and sing-a-longs. Traditionally, the patrons of pubs were often working class and, in rural communities, the pubs were social centers for entire families. Many revolutionaries secretly met and planned the country’s freedom fights in the pubs of Ireland and Irish literary figures graced many Dublin pubs with their presence.

Running an Irish Pub in this day and age is a bit more involved than it was back in the day of James Joyce or Michael Collins.