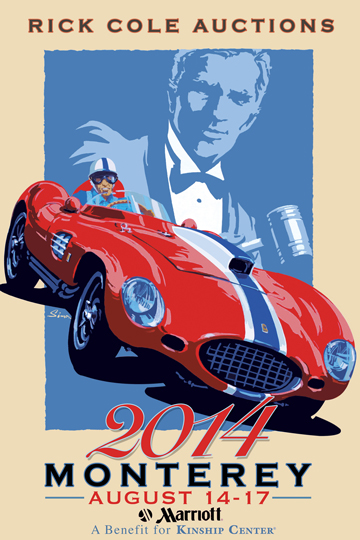 Dennis Simon, an automotive artist of international reputation and local roots, showed his work in the Goldman & Minton Gallery from September 17 until October 16, 2009.

Simon began his career in art when he received his BFA from the Maryland Institute College of Art in 1969.

Simon’s interest in cars goes back almost as far as his interest in art. He remembers drawing girls for a short time before he began filling school notebooks with car sketches. His life as an automotive enthusiast has followed the usual route, starting with a ($250) MGA while in art school, and now, 50 or 60 cars later he enjoys his 1953 Morgan the bonnet of which he recently painted plaid.

Favorite projects document automotive racing history, and he has designed over 60 original automotive racing posters for such clients as UNOCAL, Michelin, BF Goodrich, SVRA’s Bahama Vintage Grand Prix, and a series of Monterey Auction posters. Simon designed and illustrated the cover of the Indianapolis 500 program and poster in 1998.

The original paintings for many of these posters were on display at Goldman & Minton, P.C.

Simon began his career as a fashion illustrator for a short time before freelancing and eventually concentrating on automotive art. Simon re-entered the world of fashion by designing a collection of silk neckties and scarves that feature his signature automotive painting style. He has produced custom-designed neckwear under his trademark label Century of Speed® for the Ferrari Club of America, Amici Amercani della Mille Miglia, Volvo North America, the Viper Division of Chrysler, Mazda, Speed Channel, and Lotus US. As well as being an avid car enthusiast, he has also had a lifelong interest in motorcycling.

As a high school junior, his first “car” was a motorcycle. He has been riding ever since and has owned dozens of different bikes, both moderns and classics.

In recent years he has spent a few weeks each summer riding in the European Alps. This interest in motorcycles has been reflected in his professional life with commissions from clients in the motorcycle industry.

Simon’s recent works include a series of articles that he both wrote and illustrated for Christophorus, Porsche’s corporate magazine. His writing and illustrations were also featured in Auto Aficionado magazine. Simon has created poster editions for Porsche NA’s launches of their Cayman and Cayenne, for their Rennsport Reunion vintage races, as well as a commemorative poster heralding the speed records set by their mid-engine Carrera GT.

Commissions from Michelin NA include posters for Formula 1, the 24 Hours of Le Mans, the Tour de Corse Rally of Corsica, the Barber Pro Series, and the American Super Touring Series.

Goldman & Minton has enjoyed working with Dennis Simon on his copyright and trademark issues and was pleased and to have his work hanging in its office. 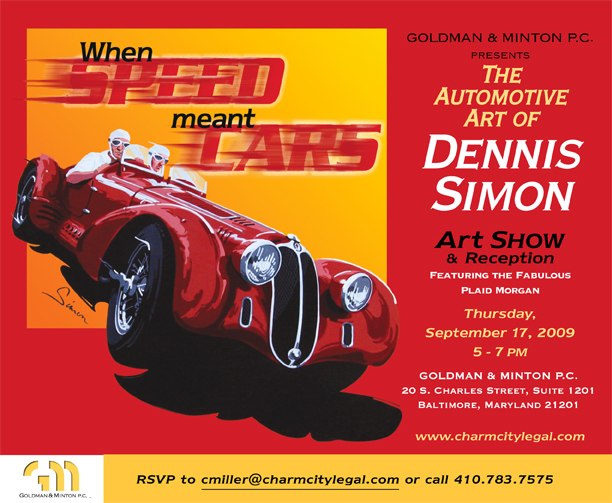